A meme is ” an idea, behavior, or style that spreads from person to person within a culture—often with the aim of conveying a particular phenomenon, theme, or meaning represented by the meme. A meme acts as a unit for carrying cultural ideas, symbols, or practices, that can be transmitted from one mind to another through writing, speech, gestures, rituals, or other imitable phenomena with a mimicked theme. Supporters of the concept regard memes as cultural analogues to genes in that they self-replicate, mutate, and respond to selective pressures.” (Wikipedia)

The internet, of course, was barely in its infancy when Richard Dawkins, a British evolutionary biologist, coined the term “meme” back in 1976. And he meant it as a much more nuanced concept, encompassing pretty much any idea that is good at propagating from one human brain to another—whether it is dialectical materialism or the tune to Happy Birthday.

But Dawkins was deliberate in his comparison of memes to genes. Like the molecular units of inheritance, memes “reproduce” by leaping from one mind to another, “mutate” as they are re-interpreted by new humans, and can spread through a population. The internet has radically accelerated the spread of memes of all kinds; but it has also led to the rise of a specific kind of meme, the kind encapsulated by a phrase or a picture. And importantly for scientists, the life of a such a meme is highly measurable.

The Smithsonian Mag has an excellent article in which author James Gleick notes that memes compete for attention across a variety of mediums:

Memes emerge in brains and travel outward, establishing beachheads on paper and celluloid and silicon and anywhere else information can go. They are not to be thought of as elementary particles but as organisms. The number three is not a meme; nor is the color blue, nor any simple thought, any more than a single nucleotide can be a gene. Memes are complex units, distinct and memorable—units with staying power. (Gleick)

According to Dawkins, Memes have several unique elements:

These characteristics generally describe the nature of information virality. Being able to personal practice media literacy, and promote good literacy amongst your network, in order to improve the information landscape and keep low-quality memes from replicating is an important service to take on.

The sharing of memes, particularly on social media, is often a mindless activity that is undertaken without consideration of the actual content or implications of the particular meme. Meme sharers often do so unaware of their cognitive biases, like bandwagon fallacy or confirmation bias, and how their actions are being justified by errors in thinking. Because successful memes are so effective at replicating, they are now frequently weaponized for influence operations. Inside the realm of influence campaigns, the meme allows a narrative to be shared, often in visual form but not always, in a culturally resonant vehicle. As the ubiquity of memes increases, the ability to weaponize also increases and many researchers and governments have studied how to deploy memes in their influence campaigns.

Meme creation has a low barrier of entry and can propagation can be accelerated by key internet and social media influencers. This scholarly article from Ignas Kalposkas provides a high-level overview of mimetic warfare in the cyber environment. This recognition of mimetic influence in our modern cyber information networks is visible in many organizations and events like Russia’s influence ops in U.S. elections and NATO’s transparent declaration of mimetic warfare as an important strategic capability. Inside the many military establishments across the world, the realm of influence operations (also called psyops or info ops) is developed by Strategic Communications departments.

The mimetic war occurs in front of our very eyes. The battleground is our social media feed, our television, and our water cooler talks. The weapons don’t look like weapons at all. They look like Kermit the Frog, Success Kid Sammy, and Aragon from Lord of the Rings. 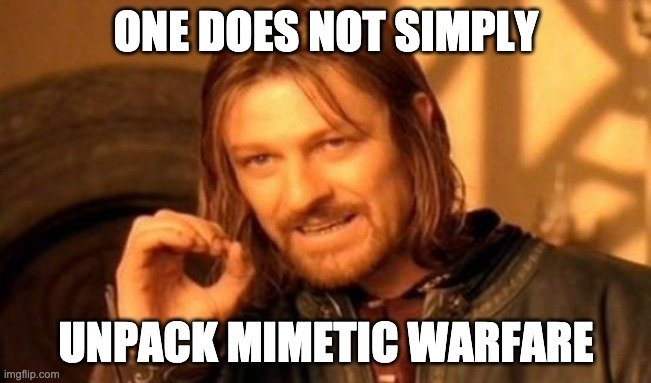 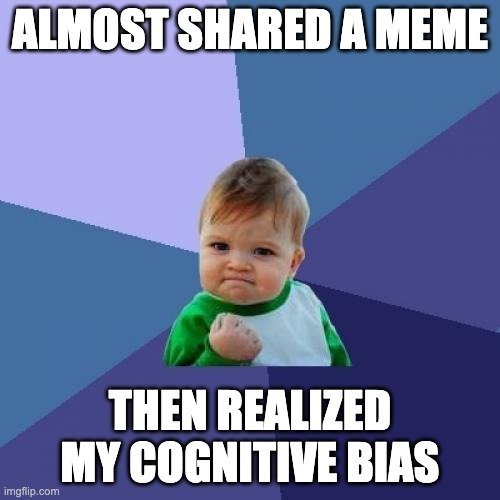 Understanding memes are an important part of sense-making. Memes are cunning and we must be vigilant for any instances when our own thinking has been influenced by a meme. Dialogue, whether in-person or online,  is benefited by our recognizing and neutralizing weaponized memes. By understanding the power of the meme, the medium can also be harnessed to share positive-sum meanings rather than zero-sum weapons.

Why You’ll Share This Story: The New Science of Memes by Christopher Mims in Quartz (accessed February 2021)

The Science of Memes